Top of the line additives for oil & fuel. 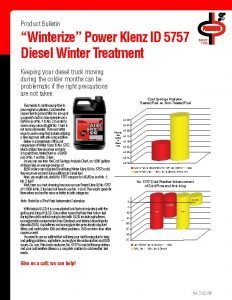 Keeping your diesel truck moving during the colder months can be problematic if the right precautions are not taken.

Fuel needs to continuously flow to your engine’s cylinders. Cold weather causes fuel to gel and filters to ice-up at a moment’s notice. Some people use a 50/50 mix of No. 1 to No. 2 in order to save money, since straight No. 1 fuel is not normally needed. There are better ways to save money that include utilizing a flow improver with anti-icing additive. Below is a breakdown of the cost comparison of Winter Klenz ID No. 5757, which utilizes flow improver and antiicing additives, treated fuel vs. a 50/50 mix of No. 1 and No. 2 fuel:

Note: Tested by a Third Party Independent Laboratory With today’s ULSD it is a complicated task that not only deals with the gelling and icing of ULSD. Some other issues that take their toll on fuel during the cold months having to deal with ULSD include asphaltenes, monoglyceride contamination from Biodiesel, and internal diesel injector deposits (IDID). Asphaltenes and monoglycerides prematurely clog fuel filters, and contribute to IDID and other problems. IDID can form from other causes as well. You need to use an additive that will keep your fuel flowing due to icing and gelling problems, asphaltene, monoglyceride contamination and IDID issues. So, use, Primrose’s exclusive, No. 5757 to combat these problems and your cold weather dilemma; a complete solution to cold weather fuel needs.

Monoglyceride Filter Clogging: They will appear on the filter as a waxy, thick coating. If you suspect this has occurred with your fuel filter in the past, is occurring with your fuel filter or you just want to prevent this from happening, use one of Primrose’s exclusive Klenz ID additives.

Diesel is composed of many components. For example, here is the typical makeup of B100 canola oil: 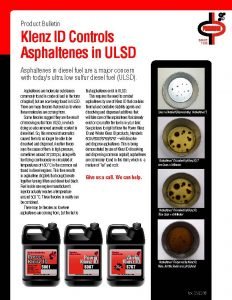 Asphaltenes are molecular substances commonly found in crude oil and in the form of asphalt, but are now being found in ULSD. There are many theories that exist as to where these molecules are coming from. Some theories suggest they are the result of removing sulfur from ULSD, in which doing so also removed aromatic content in diesel fuel. So, this removal of aromatics caused them to no longer be able to be dissolved and dispersed. Another theory says the cause of them is high pressure, sometimes around 37,000 psi, along with fuel being continuously re-circulated at temperatures of 150 ˚C in the common rail found in diesel engines. This then results in asphaltene droplets that conglomerate together turning filters and diesel fuel black. Fuel inside one engine manufacturer’s injector actually reaches a temperature around 300 ˚C. These theories in reality can be combined. There may be theories as to where asphaltenes are coming from, but the fact is that asphaltenes exist in ULSD. This requires the need to combat asphaltenes by use of Klenz ID that contains thermal and oxidative stability agents and dissolving and dispersant additives that will take care of the asphaltenes that already exist or occur after the fuel is in your tank. See pictures to right of how the Power Klenz ID and Winter Klenz ID products, Number’s 5001/5007/5750/5757 – will dissolve and disperse asphaltenes. This is being demonstrated by use of Klenz ID dissolving and dispersing common asphalt, asphaltenes are commonly found in this form, which is a mixture of “tar” and rock. 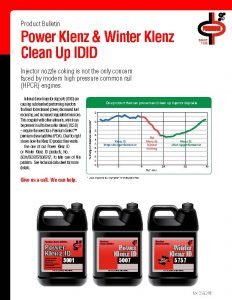 Internal diesel injector deposits (IDID) are causing substandard performing injectors that lead to decreased power, decreased fuel economy, and increased regulated emissions. This coupled with other ailments, which can be present in ultra low sulfur diesel (ULSD) – require the need for a Premium Select ™ premium diesel additive (PDA). Chart to right shows how the Klenz ID product line works. Use one of our Power Klenz ID or Winter Klenz ID products, No. 5001/5007/5750/5757, to take care of this problem. See technical data sheet for more details. 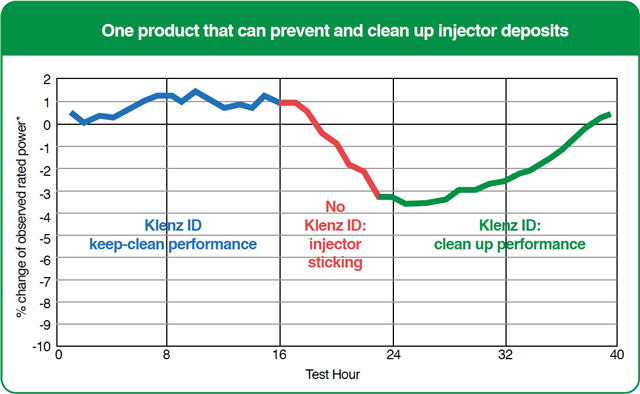 The superior quality of Primrose Plus allows for such application flexibility, that a reduced lubricant inventory is the norm.

The Primrose Plus family consists of the Armor Plate with Moly-D lubricants, all of which utilize our exclusive friction modifier Moly-D, an oil soluble molybdenum compound.

No metal surface, no matter how highly polished, is perfectly smooth. Those seemingly smooth surfaces, viewed microscopically, reveal rough asperities, or peaks and valleys, which can penetrate a film of ordinary oil and cause friction. Friction is one of the greatest contributors to metal wear.

This is where Primrose Armor Plate lubricants come in. The key to the Armor Plate line of lubricants is Moly-D, a proprietary molybdenum compound with exceptional friction-reducing properties. Molybdenum itself, a member of the chromium group, is one of the hardest metals known to man and is used in the manufacture of armor plate steel, yet in a parallel plane has one of the lowest coefficients of friction known – hence the name for this exceptional line of custom lubricants.

Also included in the Primrose Plus family is the Odyssey line of synthetic blend products. These combine the advantages of petroleum and high quality synthetic base stocks. Primrose Plus custom lubricants remain the benchmark for high performance oils and greases.

Ford Motor Company has sold—and continues to sell—millions of diesel trucks equipped with high-pressure fuel injection pumps that are proverbial ticking time bombs, wholly unbeknownst to an unassuming American public who pays for these vehicles’ fictitious “durability,” “longevity,” and “top notch fuel economy.” As alleged, Ford promised consumers the continued reliability of their diesel engines with increased fuel efficiency and power at greater fuel efficiency. However, this came with a hidden and catastrophic cost that was secretly passed on to consumers.

General Motors Co. has been hit with a class-action lawsuit alleging it equipped 2011-2016 GMC and Chevrolet diesel trucks with 6.6-liter Duramax engines that are not compatible with American diesel fuel.

The Premium Select line has evolved from a single product formulated to overcome the fuel deficiencies common during World War II.

As middle distillate fuel quality continues to fluctuate, emissions standards increase and OEM design parameters tighten, fuel additizing remains necessary. Furthermore, we have products that are effective in bio-diesel B100. Besides being the name for Primrose’s family of premium fuel treatment products, Premium Select is also the name of Primrose’s support program for fuel marketers.

Primrose is committed to assuring that there does not have to be a trade-off of performance for environmental consciousness or governmental compliance. Enviro Blend® performs as well or better than conventional oils and greases.

The advent of the chemical synthesis of petroleum oils has ushered in a new age in lubrication technology.

New advances in controlling friction, preventative maintenance, and the management of industrial operational costs are a result of specially engineered synthetic lubricants.

Syn-O-Gen wholly engineered synthetic lubricants have been specifically designed for the extra heavy duty applications found in industry where operational conditions outstrip the capabilities of conventional petroleum based oils and greases.

Although synthetic, Syn-O-Gen Lubricants are chemically synthesized from petroleum feedstocks. The big difference between Syn-O-Gen and conventional petroleum or mineral oil-based lubricants is that Syn-O-Gen is chemically engineered from specific hydrocarbon molecules. Put together much like building blocks, certain simple hydrocarbons are bonded to obtain a unique complex hydrocarbon with specific and predictable properties.

In addition, Syn-O-Gen provides several principal advantages over both natural petroleum lubricants and other synthetic lubricants: